The Department of International Educational Programs was created in accordance by the order of the Rector of OshTU No. 07-02 / 20 of February 25, 2020. 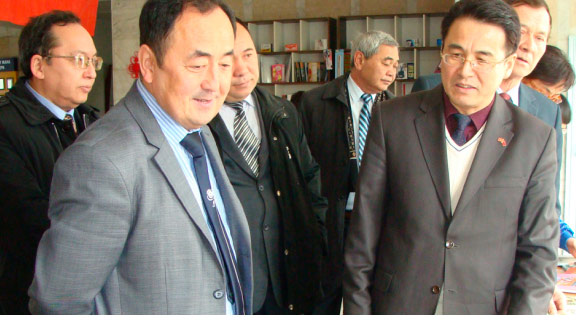 «The head of the Department International Educational Programs is Mansurov Kubanychbek Topchubaevich, candidate of Physical and Mathematical Sciences (Ph D), Professor of OshTU.

The main task of the department is to direct students for internships in foreign universities, as well as in leading universities in Kyrgyzstan.

OshTU students completed training and internships in the United States by Fulbright program; under the DAAD program in Germany, China; at the American University of Kyrgyzstan continue their studies in the master’s degree at universities in the USA, China and South Korea.

There is also a Chinese Center and an English Center in this Department.

The functions of the department include the coordination of international educational programs through the SCO University and the Russian-Kyrgyz consortium of technical universities in the development of integration processes in the field of education, science and technology.

There are the following master’s programs on the direction of training through the SCO University: ecology and energy, in particular, electric power and electrical engineering, heat power and heat engineering, management in technical systems at the National Research University “MPEI”.

Through RKKTU, OshTU cooperates with the following universities of the Russian Federation:

OshTU has agreements on cooperation with educational institutions:

On April 17, at OshTU, as part of the ELBA project, a round table entitled “New Challenges for the Implementation of Erasmus + Projects” was organized